Delightful + Unique! Our exclusive itinerary combines a vineyard stay in the Winelands and our complete Cape Town experience with a 4-day safari on a private reserve at Kruger and the thrill of Victoria Falls. With the finest guides and wonderful meals, our original journey is also enhanced by unique activities that you won't find on other tours or safaris.

On arrival at the airport, you'll be warmly greeted and escorted to our hotel close to the lively Victoria & Alfred Waterfront in the heart of Cape Town. Enjoy this complimentary pre-tour night, our exclusive AAA Vacations® Journey amenity.

Surrounded by the vineyards and historic buildings of the esteemed Spier Estate, our charming boutique hotel embodies the true spirit and warm hospitality of the Cape Winelands.

Our guests enjoy breakfast and have some time this morning to relax or explore as they wish here in Cape Town. Then enjoy the scenic transfer into the Winelands where you'll check in to our enchanting vineyard hotel. Our other travelers will be arriving today.

Martial Eagles, Black-Chested Snake Eagles, Harriers and several Falcon species are just some of the magnificent raptors that you might see at Eagle Encounter.

After breakfast, your expertly guided, full-day excursion will reveal distinctive facets of this lovely region - where pastoral vineyards and historic towns are set against a beautiful mountain backdrop. In Stellenbosch, South Africa's second oldest city, you'll find handsome Cape Dutch, Georgian and Victorian architecture – and the lively spirit of a university town. Founded in 1692, Babylonstoren is one of the region's oldest estates, with some of the buildings dating back to its founding days. Delight in the tranquil beauty of its gardens and vineyards, learn about their state-of-the-art winery and sample six of their finest vintages –both white and red. After a wonderful farm-to-table lunch at Le Petite Ferme, we'll spend time at a pioneering self-sustaining non-profit center dedicated to rehabilitating injured and rescued South African raptors. Focusing on conservation, education and reintroducing these magnificent birds back into the wild, Eagle Encounter was founded 20 years ago and offers a chance to see and learn about a variety of South African raptors. This evening, we'll savor the fine cuisine of our hotel's kitchen, prepared with fresh produce sourced from the Spier's own organic garden and other nearby farms.

Nestled on the slopes of Table Mountain, Kirstenbosch Gardens is a delightful place to experience South Africa's Cape Floral Kingdom, the tiniest but most diverse of our planet's six plant kingdoms!

An unforgettable day unfolds as you leave behind the pastoral landscapes of the Winelands to explore the wild coastal beauty of the Cape Peninsula. Travel along the Atlantic seaboard through the pleasant seaside suburbs of Sea Point, Bantry Bay and Clifton. From the fishing village of Hout Bay, you'll take a boat to see the Cape Fur Seal colony on Duiker Island. Back on the mainland, the journey along Chapman's Peak 2,000 feet above the ocean is considered by many to be one of the most spectacular coastal drives in the world! As you continue along the rocky shoreline, note the distinctive Fynbos vegetation; this unique eco-system is home to myriad bird species like African Black Oystercatchers and Cape Sugarbirds. Enter the Cape of Good Hope National Park and be on the lookout for native animals like Cape Mountain Zebra, Bontebok and inquisitive Baboons. From the iconic Cape Point Lighthouse, you'll have captivating views of False Bay. After a seaside lunch, visit Boulders Beach for an up-close encounter with African penguins. The return journey up the Peninsula takes you through the charming naval village of Simon's Town and along the lovely fishing harbor at Kalk Bay. Cap off this delightful day with a stroll through the lovely Kirstenbosch Botanical Gardens and then check in to your hotel, ideally located next to the lively Victoria & Alfred Waterfront. With only 32 guestrooms, our stylish boutique hotel is ideally located in the heart of Cape Town next to the lively and sophisticated Victoria & Alfred Waterfront.

Your guided tour of the District Six Museum reveals moving and inspiring stories about the residents of this historic area and their forced relocation during the Apartheid Era.

This morning's city tour begins with the Table Mountain Aerial Cableway… With its unique revolving cars, your ride to the top offers 360° views of Cape Town and Table Bay. From the summit, you'll be able to see the Twelve Apostles, a mountain range with dramatic rocky buttresses that drop sharply to the coast. In the opposite direction, you'll have an equally impressive view of the 3,200-foot summit of Devil's Peak. Back in the city, your tour continues with a stroll through the Company's Garden – an erstwhile fresh produce garden for ships and city residents in the 17th century and now home to the South African Museum, National Gallery and St. George's Cathedral. Stroll among the bustling market stalls of Greenmarket Square and take in the Grand Parade where Nelson Mandela addressed the nation upon his release in 1990. After lunch, the afternoon is yours to enjoy as you wish. Just across the street from your hotel, the V&A Waterfront invites exploration with its wide variety of cafes, boutiques, shops and galleries. This evening, you'll dine at Africa Café. Founded in 1992, this pioneering restaurant was the first in the city to specialize in authentic African cuisine from various countries across the Continent. Today, it's still regarded as one of the finest restaurants in this cuisine-centric city!

Our hands-on cooking class with a Cape Town family is a delightful way to experience their rich, multi-cultural heritage and a slice of daily life in the city.

Set against the flanks of Signal Hill, the pastel-hued homes and steep cobblestone streets of Cape Town's Bo-Kaap district offers a fascinating insight into dramatic chapters of South Africa's history. After a leisurely breakfast, your tour begins at the Bo-Kaap Museum where you'll learn about some of the city's earliest inhabitant - slaves who were brought over in the 1600's from Dutch colonies in Southeast Asia. From these tragic beginnings, the country's Cape Malay culture has emerged with unique traditions that are distinct from its Asian, African and Dutch influences. Experience more of this culture as you explore the neighborhood and the local spice market – a great place to learn about Cape Malay cuisine. Your tour ends at the home of a local family where our hands-on cooking class includes Cape Malay Samoosa, a delectably filled pastry similar to what you find throughout India and other parts of Southeast Asia. After dining on the dishes that you've helped to prepare, the balance of your afternoon and evening are free to enjoy and explore as you wish.

After breakfast, we'll escort you to the airport for your included flight to Hoedspruit, one of the main gateways to Kruger National Park. On arrival, you'll be met and escorted to the Motswari Private Game Reserve. Here within the highly regarded Timbavati and Umbabat Private Nature Reserves next to Kruger National Park, you'll find just 15 spacious and ultra-private bungalows. This evening you'll dine with other guests here at our intimate safari camp.

Day 8 - On Safari On Our Private Reserve

Our nature reserves share an unfenced boundary with Kruger National Park and together with other privately owned reserves including Klaserie and Sabi Sands, the region comprises 5 million acres of open land that allows for the unfettered free movement of game – as close as you can possibly get to an authentic experience of the "real" Africa! Here within the esteemed Timbavati and Umbabat Reserves, the wildlife-viewing is indeed spectacular. Setting out in Land Rovers with our safari guide and sharp-eyed tracker, your morning and afternoon game drives offer thrilling chances to spot all of the Big Five – Elephant, Lion, Leopard, Rhinoceros and Cape buffalo. Back at camp, you might go for a refreshing swim, take in the views from your private deck, or join fellow guests in the main lodge. Delightful meals are attentively served and accompanied by fine South African wine.

Day 9 - Another Day On Safari At Kruger

Encompassing typical Southern African bushveld, watering holes and river beds, this sector of the Greater Kruger National Park is home to a remarkable variety of Big Game including Elephant, Cape Buffalo, Zebra, Wildebeest, Kudu and several other types of Antelope. In turn, these healthy populations of plains game attract a number of predators – particularly hyenas and lions. With sharp eyes and a bit of luck, you might also spot the African wild dog and the elusive cheetah; together with the famous big five, these two animals comprise the Magnificent Seven! Once again accompanied by our experienced safari guide, you'll set out today on morning and afternoon game drives to track these animals across our private reserve.

Thrill to a final day of exciting and enriching activities with our expert safari guides. In addition to our morning and afternoon game drives, you might also join a guided safari walk – a terrific way to experience the smaller "details" of our Private Reserve - including insects and butterflies and the unique flora. Before your afternoon game drive, you might join our experienced rangers for an informal talk to learn more about the greater Kruger area – including its varied ecosystems and diverse wildlife.

Enjoy a refreshing Sundowner cocktail and light snacks on our guided Zambezi River cruise... And watch for animals as they descend to the riverbanks to graze and quench their own thirst.

You'll be escorted to the airport today for your included flight to Zimbabwe. On arrival in Livingstone, you'll be met and escorted to your hotel. Here along the banks of the mighty Zambezi River with wildlife roaming the landscaped grounds, you'll enjoy an elegant guestroom with a private balcony or verandah. As the afternoon wanes, join our river guide for a wonderful sunset cruise.

Discover for yourself why locals refer to these thundering cascades as Mosi oa Tunya - the "Smoke that Thunders!"

David Livingstone was the first European to visit the Falls and named it after Queen Victoria. You'll hit all the best vantage points on both the Zambia and Zimbabwe sides of Victoria Falls as our experienced guide takes you along scenic paths through the verdant forest. Thrill to the view of these mighty cascades from Knife Edge Bridge and hear the roar at Devil's Cataract. The rest of this day is yours to delight in the idyllic setting and ambiance of your luxury hotel. Note: Water levels are lower from August to November and vantage points may differ.

After breakfast, you'll be escorted to the airport for your onward journey.

Pricing is per person, land and on-tour flights only, based on May 14, 2021 travel date. Single supplement from $2,300. International airfare is additional. Call AAA for current airfare rates and availability. Save an extra $1,000 per couple ($500 per person) when you pay in full at booking.. 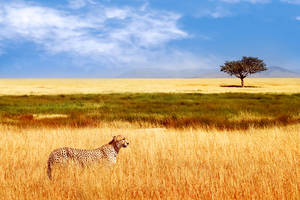 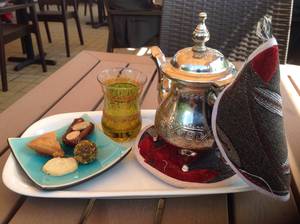 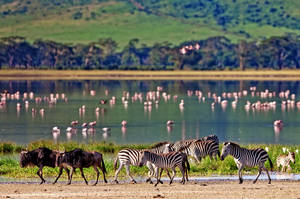 Elegance Of The Nile 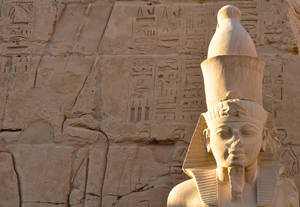