With never more than 16 guests and a uniquely immersive itinerary, experienced native guides will reveal more sites of Biblical antiquity and immerse you in 21st-century Israeli life. By night, you'll delight in luxury hotels and resorts, including an unhurried 4-night stay in Jerusalem that allows for extensive exploration of the Old City, Bethlehem, Masada and the Dead Sea.

Guests arrive today and will be met at the airport and assisted through immigration and customs. Then we'll chauffeur you to our boutique hotel to enjoy your complimentary pre-tour overnight in the heart of Tel Aviv.

After breakfast, guests have this day to do as they wish. Take advantage of our hotel's wonderful city-center location close to the waterfront to explore on your own - or simply relax. After our other guests arrive later today, you'll meet for a congenial welcome dinner.

Founded in 1909 and developed under the British Mandate in Palestine, the White City of Tel Aviv is an outstanding example of innovative, early 20th-century town planning. Discover this UNESCO World Heritage Site - recognized as a fine architectural ensemble of the European Modern Movement in a new cultural context.

This morning's sightseeing begins in Jaffa, one of the oldest areas of Tel Aviv. An important seaport since antiquity, its ancient streets and still lively waterfront offer a palpable sense of the ancient traders who came here – both by sea and camel caravan. Continue along Rothschild Boulevard to explore the distinctive White City of Tel Aviv. From Tel Aviv, you'll journey northward along the coast to the ancient city of Caesarea. Built by Herod the Great and once the seat of Roman rule in the region, its excavated highlights include an impressive theater and the aqueduct that brought water to the city in ancient times. Then enjoy a tour and tasting at a local winery and learn about ancient Megiddo as you continue to Cana to see the Wedding Church where Jesus performed his first miracle, turning water into wine. In Nazareth, you'll visit the Basilica of the Annunciation. The current 60-year-old landmark you'll admire today is the fifth church built on the same site. The first was likely a simple 4th-century alter set in the grotto that was believed to be the site of Mary's house. Many historians maintain that the first actual Church of the Annunciation was commissioned by Emperor Constantine and completed in 470 AD. Continue to Tiberias and check in to our luxury resort on the Sea of Galilee. Enjoy a private villa with a private plunge pool or a hot tub and balcony overlooking the water.

Visit the Yigal Allon Museum to see a remarkably preserved wooden fishing boat. Discovered in 1986, scholars have since dated it to the 1st-century CE during the time of Jesus.

After breakfast, a guided excursion on the tranquil waters of the Sea of Galilee offers a terrific introduction to this beautiful region - so rich in biblical history. Back on land, you'll journey to Capernaum where Jesus spent much of his ministry and chose his first disciples. See the 2nd-century synagogue where extensive excavations have shed light on ancient life in the area and continue to Tabgha to admire the fine mosaics at the Church of the Multiplication, the site of Christ's feeding the 5,000. On Galilee's northwestern shores, you'll visit the Mount of Beatitudes. Although there is still discussion among scholars, this spot has long been commemorated by many as the hill where Jesus delivered the Sermon on the Mount. Continue your touring with the archaeological site at Caesarea Philippi at the foot of Mt. Hermon. Built around a spring, one of the main sources of the Jordan River, this Greco-Roman city was in ancient times associated with the Greek God Pan. Ascend the Golan Heights for sweeping clear-day views that stretch all the way to Syria and then return to our luxury resort on the Sea of Galilee.

Begin another day of enriching exploration at Yardenit, a popular Baptismal site on the Jordan River. Continue to Beit She'an where extensive archaeological excavations that have revealed many ancient landmarks including an impressive Roman amphitheater. This is a rich site where you can learn about Israel's many layers of civilizations, dating back 5,000 years to an early settlement that later saw successive waves of conquerors including Egyptians, Philistines and Assyrians. Beit She'an was rebuilt as a Hellenistic city about 2,000 years ago before reaching its peak as a 5th-century Roman metropolis with as many as 40,000 inhabitants. Then discover the unusual Zodiac-motif mosaics of Beit Alpha, a Byzantine synagogue, before continuing onward to Jerusalem. Take in the views of the city from atop the Mount of Olives and stroll in the Garden of Gethsemane where ancient, gnarled olive trees still bear fruit and give the Garden a timeless feel. Then check in to our hotel overlooking the Old City of Jerusalem.

At the Machane Yehuda Market, you can engage with friendly vendors and mingle with the city's rich mosaic of residents as your guide shares insight into Israel's modern food scene and enduring traditions. And with a prepaid meal card, you can sample exotic Middle Eastern delicacies and foods from around the world.

A Holy City for three of the world's great religions – Judaism, Christianity and Islam – Jerusalem occupies a unique place in humanity. Enter the Old City and stand before the Temple Mount and the Western Wall - the holiest of Jerusalem's Jewish sites, sacred because it is a surviving remnant of the Herodian retaining wall that once enclosed and supported the Second Temple. In front of the Western Wall is a large plaza that was created in 1967 as an area for prayer. Continue along the winding streets of the Jewish Quarter to visit the historic Hurva Synagogue. Destroyed in 1948 during the Arab-Israeli War, it was recently rebuilt in its original 19th-century style. Walk along the Via Dolorosa to visit the Church of the Holy Sepulchre, an important pilgrimage site since the 4th century, and then continue through the lively Arab Bazaar. On Mount Zion, you'll see the traditional Tomb of King David and the Room of the Last Supper. End your sightseeing at the colorful Machane Yehuda Market; established nearly a century ago, it's still the largest open air market in Israel. This evening, you will visit the Tower of David, an ancient citadel near the Jaffa Gate entrance to Jerusalem's Old City. As darkness envelops the site, a spectacular Sound and Light Show unfolds with breathtaking virtual reality images and sophisticated trompe l'oeil technology to tell the story of Jerusalem.

With a tempting variety of Middle Eastern salads and appetizers and a main course, today's lunch with a local family in Bethlehem is enhanced by lively conversation with your hosts – and a chance to gain genuine insight into their lives.

This morning, you'll visit Yad Vashem – The World Holocaust Remembrance Center. Founded in 1953 as a principle center for the documentation, research, education and commemoration of the Holocaust, Yad Vashem remains a dynamic and vital place dedicated to safeguarding the memory of the past and imparting its meaning to future generations. Then enjoy an expertly guided tour through the Israel Museum. Established in 1965 as the largest cultural institution in Israel, it's now ranked as one of the leading art and archaeology museums of the world. Among the highlights in its vast millennia-spanning collection are the Dead Sea Scrolls and a meticulously constructed model of ancient Jerusalem during the Second Temple Period. Then travel to Bethlehem where we've arranged for you to have lunch in the home of a Palestinian Christian family. Then visit the Nativity Church, the oldest standing church in the Holy Land. Originally built in the 4th-century by St. Helen, the mother of Emperor Constantine, the present 6th-century structure was erected by Justinian. This evening's farewell dinner offers a chance to share experiences and insights gained with your fellow travelers.

Be sure to bring your swimsuit today as you'll enjoy lunch and have time for a swim - or maybe just a relaxing float - in the buoyant therapeutic waters of the Dead Sea.

After breakfast, you'll embark on a full day excursion to explore the region of the Dead Sea; at nearly 1,400 feet below sea level, it's the lowest point on Earth. Leaving the city behind you, you'll see the site of the Qumran Caves where the Dead Sea Scrolls were discovered. Continue to Masada, where you ascend by cable car to visit the hilltop ruins and hear the chilling tale of its brave inhabitants. Overlooking the Judean Desert and Dead Sea, Masada is a natural fortress of rugged beauty. Atop this strategic site, Herod the Great built a palace complex in the classic style of the early Roman Empire. In 73 A.D., it was the site of a violent clash where Jewish patriots made their heroic last stand in the face of an overwhelming Roman army. Today, the fortifications and attack ramp that encircle the monument are the most complete Roman siege works surviving to the present day. Then spend some time at the Dead Sea before returning to Jerusalem; en route back to the city, you'll also stop to see Wadi Qelt and its 5th-century Monastery of St. George, built into the side of a cliff and still inhabited by monks. This evening, you'll enjoy a farewell dinner - and a final chance to share your experiences with your fellow travelers.

You'll be escorted to the airport today for your departure flight.

Pricing is per person, double occupancy, land only, based on April 23, 2022 travel date. Single supplement from $1,900. International airfare is additional. Call AAA for current airfare rates and availability. Save an extra $600 or more per couple ($300 or more solo) when you pay in full at booking. Ask about our 5-day extension to Petra and Jordan.. 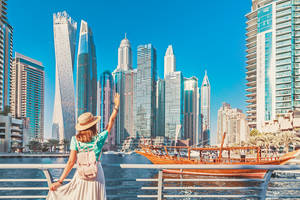 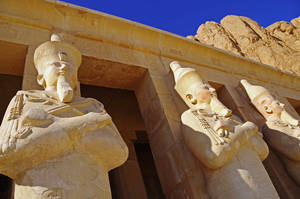 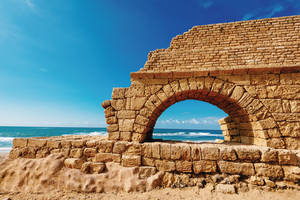 Israel: A Journey Of Faith 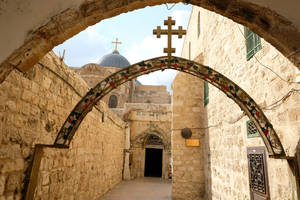